A Special Night In Harlem

THE TRUMP/PENCE REGIME MUST GO! In The Name of Humanity, We REFUSE To Accept a Fascist America.
A Better World
IS Possible 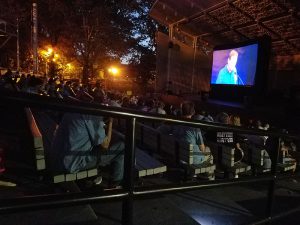 It was a special night in Harlem, this August 30. A heat wave had broken, the clouds held back an expected rain, and as the daylight sky gently darkened, people took their seats at the amphitheater of Marcus Garvey Park in Harlem. They had come to watch the film of Bob Avakian’s talk THE TRUMP/PENCE REGIME MUST GO! In The Name of Humanity, We REFUSE To Accept a Fascist America. A Better World IS Possible.

The larger-than-life screen… the proximity of people, numbering over 160 at the peak, sitting together and taking in Bob Avakian’s (BA’s) historical analysis, his summoning to act, and the possibility of a better world… in the neighborhood known worldwide as a center of African-American life and culture—all this made for an important and memorable event.

It was a multinational audience—mainly middle-aged but with pockets of young people, and very diverse: professionals and creative folk, activists, people from the neighborhood, and the homeless. Many had heard about the event through social media or had seen posters and flyers in Harlem and at cultural events in Brooklyn. Others got the word at Revolution Books or through the outreach of the store and the Revolution Club. And some found out just that evening—walking through the park, they were challenged to face the reality of the moment and to meet the leader of the revolution.

People came out of curiosity about Bob Avakian, hunger to understand what we’re facing, disgust at the white supremacy gone berserk, and the caging of immigrant children, wanting to connect their feelings with something bigger. And a number of people who had seen the film before wanted to turn friends and others on to it.

The evening’s showing was introduced by Carl Dix from the Revolutionary Communist Party, and a member of the Host Committee for the event. Three other Host Committee members were also at the showing and made brief comments of welcome. Nkosi Anderson, PhD candidate at Union Theological Seminary: “We’re going to see this is a great talk. The hope is to inspire thinking, critical dialogue, debate, and most important, action, as we leave this place to go forward, and to work our tails off to get this Trump/Pence regime out of office.” Pastor Doris Johnson of the Faith Tabernacle in Queens: “We want you to look at this film tonight, talk to your friends about it, and your churches, or your community. Let them bring this film in so others can see it.” David Orenstein, professor at Medgar Evers College: “We must stop Trump. We must stop Pence. We must stop the enablers. We must stop all of this that is affecting our common goodness and our common humanity.”

Once the film started, people relaxed into it, there were murmurs of outrage and approval as BA delivered the truth straight-up, and went deeper into the truth and history of the system with utter disdain for it. Some in the audience chuckled when he asked, “What’s the matter with liberals?” and sighed heavily at the mention of the “demented bully with his finger on the nuclear trigger.”

A young Black guy from the film company that handled the big-screen projection, which did an excellent job, called his mom in the Bronx as soon as he found out what the film was about, urging her to come to the showing. A young white man in the crew said BA “captured so much of what I feel” and plans to come to Revolution Books to find out more about him.

As the evening drew to a close, many from the audience hung around to talk about what they had just seen and heard, to learn more, and to get connected up with Refuse Fascism, Revolution Books, and the Revolution Club. See below for some of what people were saying right after the showing. One young woman described what she was thinking after the watching the film: “It was really great … I feel really charged up and ready to fight and resist and make a better world.”

Voices from the Harlem Showing

Here is more of what we heard from people in the audience after the showing:

Black man in his 30s: I didn’t know who this gentleman [BA] was, but he definitely has a powerful speech; definitely has powerful facts that make you want to think, expand upon it, and learn more. Our country is undergoing a lot of things that people may not understand. They just go off what they see on television. I’m thinking about this whole election. His bigotry, and being open about it. Sending people back to their country, wherever they came from. America is supposed to be the “land of the free.” He [BA] is saying some powerful stuff that really provoked thought. To really, really think about.

Older Black man: There was some really powerful, provoking stuff he said. A lot of stuff I wasn’t aware of, that the system is really broken. There’s too much injustice right now. I’m aware of the way they’re anti-immigrant, anti-homosexual. Trump is just bringing this hate. It’s just mind-boggling … I think Bob Avakian is awesome. He’s implementing a system, organizing people for revolution. Because the masses of people, I’m convinced, are unhappy with what’s going on. This master and slave thing and this system, it’s not cool.

A retired Hunter College professor who called Revolution Books the day after the showing: I took notes as best I could … and when Avakian calls on people to “free yourself from the GTF” [the Great Tautological Fallacy that insists America is a force for good in the world so everything it does is good or done with good intentions] and how we can’t achieve real change by relying on the Democrats and voting … it reminded me of 1968, and getting to another world, and now I want to finish THE NEW COMMUNISM.

Young publicist for progressive theater companies: I came out to the Bob Avakian screening at Marcus Garvey Park, and was thoroughly moved by Avakian’s analysis and am eager to learn more.

Black woman in her 50s: I’ve felt anxious ever since Trump took office. I don’t think I’ve had any real peace since he’s been in that position. So I wanted to hear what suggestions Avakian has for us.

Young white woman who works in theater and dance: [About BA’s point on the GTF—the Great Tautological Fallacy] I was actually really glad to see someone talking about it and calling it out. I’ve struggled with it, like the dissonance with people saying “we’re the greatest country in the world” and that’s why we have to do “nation building” in the Middle East with Bush. And then just sitting in history class and hearing about all the kinds of things we’ve done. Learning about how the Nazis took some ideas from the way we implemented Jim Crow. And you can’t go out and say we’re the greatest country in the world when it’s doing things like that…. People in so many other countries see that dissonance so much better than we do.

Young Latino park worker: That man [BA] just blew my mind. That this information is kept from people is criminal. I want to go online and find out more about him and what he is all about.

Pastor Doris Johnson: I just love Bob Avakian. He has so much heart, so much love for the people. We have to get more people to be paying attention.

Black woman in her 20s: [On why she came to the showing.] I know that there’s definitely something wrong with the state we’re in in America, but I wasn’t really 100 percent sold on how things could change in a really real way. I was introduced to the Revolution Club and the bookstore, but I wasn’t sure of the whole diagram for success, you know what I mean? … After seeing the film, it definitely answered a lot of my questions. I loved his passion. Historically, it gave me a lot of perspective. I want to believe, you know, that this is all possible. I just think it’s important that people aren’t so apathetic and that we arise some passion into people, into the importance of change.