Bob Avakian (BA) is the architect of a whole new framework of human emancipation, the new synthesis of communism. This new synthesis is based on more than 40 years of revolutionary work critically analyzing and drawing from past revolutionary experience and theory, and a broad range of human activity and thought. It is a continuation of, but also represents a qualitative leap beyond, and in some important ways a break with, communist theory as it had been previously developed.

Fundamental and essential to this new synthesis of communism is its emphasis on applying a thoroughly and consistently scientific method and approach to understanding the dynamics of society and to charting pathways for its revolutionary transformation. By breaking with aspects of communism that have run counter to its scientific method and approach, Bob Avakian has qualitatively advanced communism as a science, and in so doing, has created the foundation and point of departure for a new stage of communist revolution which he argues is urgently needed in the world today.

This scientific method and approach is key to the breakthroughs of the new synthesis which include: deepening the understanding of internationalism; developing new insights into the strategic approach to revolution, which reveal the actual possibility of making revolution, even in a country like the U.S.; and re-envisioning how to go forward in the struggle to create a radically new—and truly emancipatory—society. Bob Avakian is the author of the landmark work the Constitution for the New Socialist Republic in North America, which provides a comprehensive, visionary, and at the same time concrete, framework and guide for building this new society as an important part of advancing towards a communist world free of exploitation and oppression.

Bob Avakian has been the Chairman of the Revolutionary Communist Party, USA since its founding in 1975. He has dedicated his life to serving the cause of revolution and the emancipation of humanity, and has consistently taken responsibility for leading the movement for revolution—both theoretically and practically. As a leader, he embodies a rare combination: someone who has been able to develop scientific theory on a world-class level, while at the same time having a deep understanding of and visceral connection with the most oppressed, and a highly developed ability to “break down” complex theory and make it accessible to a broad audience.

To learn more about Bob Avakian and the new synthesis of communism and to access his works, go to BA’s Body of Work.

"...if you don't have a poetic spirit—or at least a poetic side—it is very dangerous for you to lead a Marxist movement or be the leader of a socialist state." 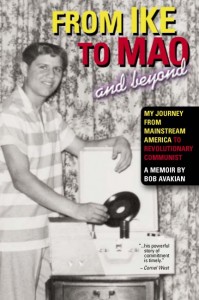 Listen to Bob Avakian read from his memoir.
Read excerpts from the memoir.

TIMELINE—
Political Activism and Revolutionary Leadership of Bob Avakian (BA), During the 1960s-1970s, and Continuing to the Present Time 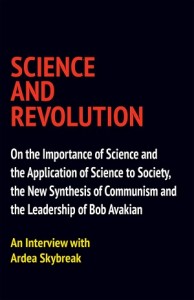 Science and Revolution:
On the Importance of Science and the Application of Science to Society, the New Synthesis of Communism and the Leadership of Bob Avakian,

An Interview with Ardea Skybreak