NEW:
We are proud to announce that BREAKTHROUGHS: The Historic Breakthrough by Marx and the Further Breakthrough with the New Communism, A Basic Summary by Bob Avakian is now available as an ebook.

FEATURING:
NEW YEAR’S STATEMENT BY BOB AVAKIAN
A New Year,
The Urgent Need For A Radically New World—
For The Emancipation Of All Humanity

Bob Avakian on
SHAKESPEARE AND STRATEGIC COMMANDERS OF THE REVOLUTION

FEATURING:
CAPITALISM-IMPERIALISM—THE SUFFOCATION OF SEVEN BILLION— AND THE PROFOUND NEED FOR A WORLD ON NEW FOUNDATIONS

RADICAL CHANGE IS COMING: WILL IT BE EMANCIPATING, OR ENSLAVING—REVOLUTIONARY, OR REACTIONARY?
by Bob Avakian

REVOLUTION, ROGER FEDERER’S TENNIS: WHAT DO THEY HAVE TO DO WITH EACH OTHER? A LOT, ACTUALLY.
by Bob Avakian 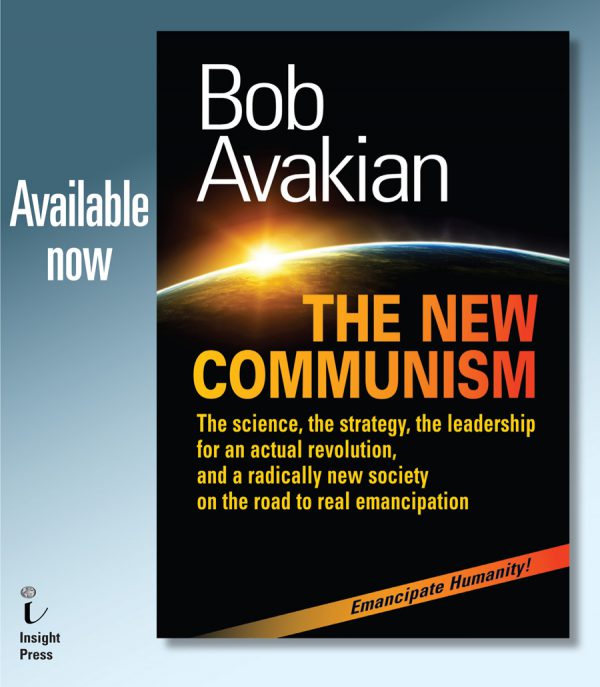 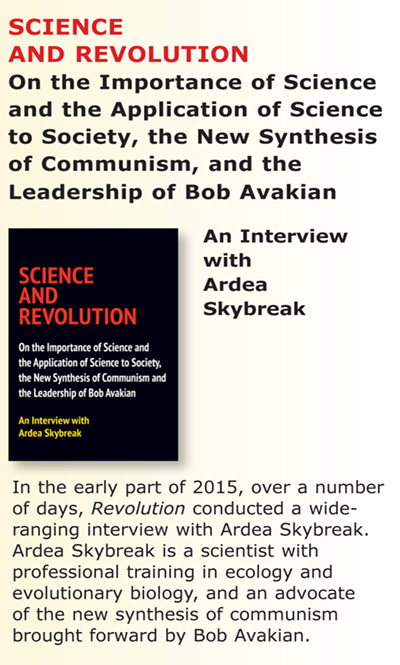 Bob Avakian (BA) is the most important political thinker and leader in the world today.

Bob Avakian is completely different than the endless stream of bourgeois politicians who are put forward as “leaders,” whose goal is to maintain one variation or another of this system of capitalism-imperialism that is founded on and perpetuates itself through cruel and literally life-stealing exploitation, murderous oppression, and massive destruction, in all parts of the world. BA is a revolutionary who bases himself on the scientific understanding that this system must finally be overthrown through an organized struggle involving millions of people, and replaced with a system that is oriented to and capable of meeting the most fundamental needs of humanity and enabling humanity to become fit caretakers of the earth.

Bob Avakian is the architect of a whole new framework of human emancipation, the new synthesis of communism, which is popularly referred to as the "new communism."

◾ Bob Avakian on SHAKESPEARE AND STRATEGIC COMMANDERS OF THE REVOLUTION

◾FASCISTS TODAY AND THE CONFEDERACY: A DIRECT LINE, A DIRECT CONNECTION BETWEEN ALL THE OPPRESSION

◾ RACIAL OPPRESSION CAN BE ENDED—BUT NOT UNDER THIS SYSTEM

◾THE DEADLY ILLUSION OF “NORMALCY” AND THE REVOLUTIONARY WAY FORWARD

◾ RADICAL CHANGE IS COMING: WILL IT BE EMANCIPATING, OR ENSLAVING—REVOLUTIONARY, OR REACTIONARY?

◾ REVOLUTION, ROGER FEDERER’S TENNIS: WHAT DO THEY HAVE TO DO WITH EACH OTHER? A LOT, ACTUALLY.

“Science vs. Conspiracy Theories, Fascist ‘Certitude’ and Liberal Paralysis,”
a podcast from Emancipate Humanity with Bob Avakian
presented by The RNL Show—Revolution, Nothing Less!

EMANCIPATE HUMANITY with Bob Avakian, presented by The RNL Show—Revolution, Nothing Less!, is a podcast featuring the voice and work of Bob Avakian. Bob Avakian (BA) is a revolutionary leader, architect of a whole new framework for human emancipation, the new communism, and author of the Constitution for the New Socialist Republic in North America.

Climate catastrophe, wars for empire, white supremacy and police murder, hatred of women and LGBTQ people, the demonization of immigrants, and the rising threat of fascism... what will it take to STOP all this and bring into being a world where this really is no more? Tune in to hear directly from BA with short, biting commentary, deep exploration, answers to these most burning questions, and an invitation for you to be part of this revolutionary journey.

Tune in to EMANCIPATE HUMANITY with Bob Avakian. Be part of this revolutionary journey.

Bob Avakian is a compelling advocate for real social change, and the more his voice and vision are exposed—and the film … is a powerful vehicle—the more I’m convinced that others will feel a need to join him on the ramparts.

Avakian skillfully weaves together the unique challenge we confront with the very specific brand of American fascism we face with Trump, the white nationalist Christian fascism of Pence, together with a historical context of how we got here—while issuing a very specific call to action now because this is a true worldwide emergency.

This country and this world are in turmoil. What Bob Avakian says about having a revolution in Why We Need An Actual Revolution And How We Can Really Make Revolution — this may be the only answer. … my god the people of this country and all over the planet need this!

…more important than a wake-up call, it’s a call to action… so we can fight, resist, organize, mobilize against this fascist regime that we have in the U.S.

I love it when he talks about my people being all people… My people across the board—I don’t care who they are…he always puts the struggle against white supremacy at the center… Second, the centrality of the issue of gender, the vicious forms of patriarchy… Third, empire—invasions, dominations… And the fourth, the planet—not just global warming. It’s ecological catastrophe… … END_OF_DOCUMENT_TOKEN_TO_BE_REPLACED

Dr. Cornel Westspeaking about THE NEW COMMUNISM at the launch for the book

Bob Avakian is a man living in truth. This man doesn’t blink. Avakian’s talk was so penetrating, convincing and compassionate…. use this talk to deal with the fear factor, the apathy, the propaganda machine, the distraction and dumbing down to the max. Instead, refuse to live on the dark side and be focused on stopping this fascism.

Having gone and listened to a live, public Bob Avakian speech, as I have, is to be exposed to one of the most provocative, serious and controversial social thinkers of our time. He’s an American original who should be heard, debated and critiqued for these dramatic and troubling times.