October 22, 2016: Engaging THE NEW COMMUNISM at the Silver Lake Library

On October 22, 2016, the Silver Lake Library and The Bob Avakian Institute co-sponsored an event about Bob Avakian’s new book, THE NEW COMMUNISM: The science, the strategy, the leadership for an actual revolution, and a radically new society on the road to real emancipation. 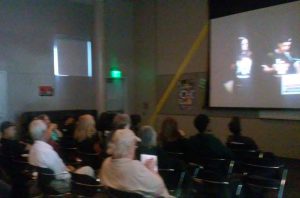 The event drew a small number of people from this community along with the Revolution Club and people running with it who came from a car caravan which took place in South Central LA, as part of the National Day of Protest to Stop Police Brutality. Those who came were both open and serious. A couple people heard about it from KPFK, a couple others heard about it from seeing the flyer around the neighborhood. The topic of the book drew people who were fueled by a deep upset over the state of the world.

Our time at the event was short so we watched a small part of the launch event for THE NEW COMMUNISM which took place in Harlem on October 8. We watched Andy Zee’s powerful introduction to the event, and a selection of readings from the book, giving people an important taste of the work itself.

Annie Day, the director of The Bob Avakian Institute spoke about the difference it would make if this work were known and engaged throughout society, what The BA Institute is aiming to accomplish and how people can contribute to that. We then opened it up for a lively discussion and Q&A.   One woman talked about how upset she is at the suffering in the world but also people’s apathy in response to that and how numbed people in the US are overall. What do we do about that? And specifically, she asked why there weren’t 500 more people at an event like this. Annie agreed with her passion, and went back to the horrors that are going on all over the world, but also got into Avakian’s analysis of the source of these problems and his scientific understanding that these will not be resolved without an actual revolution.   To the point that there weren’t 500 more people there, yes, there need to be. But Annie also put it back to people there, “I’m more concerned about what the people in this room will do now that they have heard what they have heard.” She talked about BA’s insistence that we not let what people think at any point in time set the terms – but the reality of what the system will force them to confront by its very workings, and that everyone in the room has a responsibility to act now to set whole new terms in society. This means getting into THE NEW COMMUNISM themselves and it means being on a mission to let other people know this work and this leadership exists, that there is a way out for humanity. A Black woman from South Central spoke and offered the example of her own experience.   She witnessed a young Latino being murdered by the police, and said from that point on she wasn’t going to be concerned about what other people were going to do or not do, she had a responsibility to speak out and to act, whatever the repercussions might be.   She had to start out with what she knew to be true, and not be concerned with what others thought. That is how you change the world. 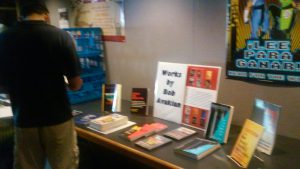 There were other questions that were raised about what was meant by an actual revolution, what would that look like and how would that happen, and also about what is meant by real emancipation. Almost everyone there took home a copy of THE NEW COMMUNISM and some joined us at a nearby tavern to continue the discussion for several more hours.

For the two weeks leading up to the event, volunteers with The BA Institute spent time in Silver Lake, an area of Los Angeles with a concentration of artists and others working in creative fields, including many millennials. Word was spread about this pathbreaking book and the upcoming event at concerts, farmer’s markets, bookstores, galleries, coffee houses, libraries, at an art museum and other places in the area.

Through all this, we found many people who were deeply upset about what was happening in the world, angry about the choices represented in the elections, and were badly in need of and very open to learning about the scientific framework and understanding and the way out of this madness that is represented by the new synthesis of communism developed by Bob Avakian. There were a small but significant number who were expressly interested in the fact work that Avakian has done on what it will take to make an actual revolution, and were even relieved that someone was talking about this in such a serious way.   Others were drawn to the way that Avakian speaks to the nature of capitalism and imperialism. And there was openness to both reevaluating the history of communism and wanting to know more about what the impact of the new synthesis of communism would have on a future new society.

This was an important beginning for ongoing work we want to do in this area – having a real impact and breaking open a great of deal of discussion and debate over the state of the world, and what the new synthesis of communism represents and opens up for humanity.