invite you to a film screening of Part 1 of 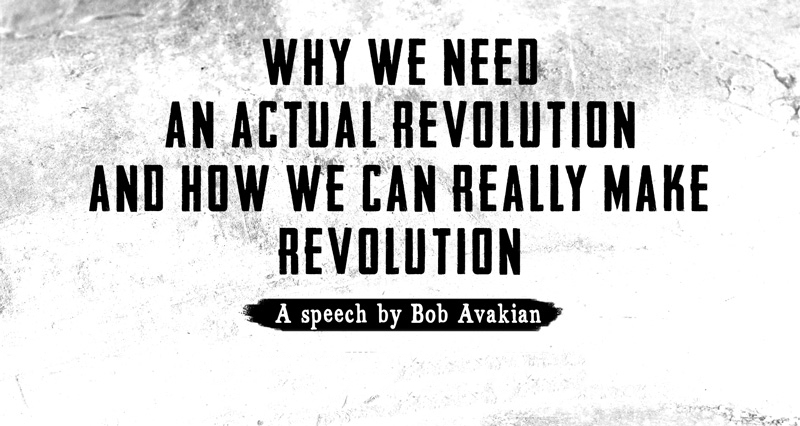 “…we have two choices: either, live with all this—and condemn future generations to the same, or worse, if they have a future at all—or, make revolution!”

WHO IS BOB AVAKIAN?

Bob Avakian, BA, is the most radical revolutionary on the planet. He’s developed the new communism and has written a Constitution for a New Socialist Republic in North America, a sweeping and concrete vision and “blueprint” for day one after the revolution.

BA has developed answers to why this system can’t be reformed… how revolutionary forces could grow from weak to strong, and actually defeat the enemy… how people could then build a new society on the road to emancipating all of humanity throughout the world… and how to wage the struggles of today to reach that goal.

BA has done decades of work to develop the scientific method we need to make the revolution we need and to bring into being a radically new world without exploitation and the antagonisms that keep people divided. BA breaks down why reality is the way it is, and how people can change it for the better. He has never lost sight of the potential of the most oppressed to become emancipators of humanity.

BA has developed the strategy and plan for how to go for an actual revolution… understanding the strengths of this system, but also its strategic weaknesses… and making that revolution with the whole world in mind. He is leading the movement for revolution today to get organized to make that revolution at the soonest possible time.

BA’s leadership is a huge strength for the revolution: to follow, to learn from, to defend.

Get into BA at revcom.us

Those this system has cast off, those it has treated as less than human, can be the backbone and driving force of a fight not only to end their own oppression, but to finally end all oppression, and emancipate all of humanity.