The Launch of a New Pathbreaking Book from

The science, the strategy, the leadership
for an actual revolution,
and a radically new society
on the road to real emancipation

The event took place Saturday, October 8
at the Schomburg Center for Research in Black Culture
Featuring: 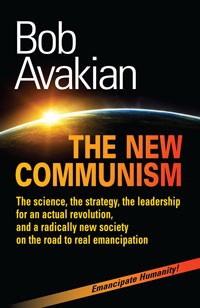 FOR ANYONE WHO CARES ABOUT THE STATE OF THE WORLD and the condition of humanity and agonizes over whether fundamental change is really possible, this landmark work provides a sweeping and comprehensive orientation, foundation, and guide to making the most radical of revolutions: a communist revolution aimed at emancipating humanity – getting beyond all forms of oppression and exploitation on a world scale.

THE AUTHOR, BOB AVAKIAN, IS THE ARCHITECT OF A NEW SYNTHESIS OF COMMUNISM. This new synthesis is a continuation of, but also represents a qualitative leap beyond, and in some important ways a break with, communist theory as it had been previously developed. Avakian has written this book in such a way as to make even complex theory accessible to a broad audience. In this book, he draws on his decades of work advancing the science of communism and his experience as a revolutionary communist leader, including leading the Revolutionary Communist Party, USA, as its Chairman since its founding in 1975.

THIS IS A PATHBREAKING WORK, one that scientifically analyzes the system of capitalism-imperialism and its unresolvable contradictions; confronts the challenges facing the movement for revolution; and forges a way forward to making an actual revolution in this country, as part of contributing to communist revolution internationally.

Now also available as an E-book at major retailers and also in PDF format through some retailers.

Updated pre-publication PDF of this major work—now including the appendices—available HERE.

Note: This work by Bob Avakian was previously posted
under the title The Science, The Strategy, The Leadership
for an Actual Revolution, And a Radically New Society on
The Road to Real Emancipation.

What people are saying about The New Communism.